We spoke with Ana Janošev, Managing Director at Social Impact Award, one of Europe’s largest communities of early-stage social entrepreneurs under 30, active in Europe, Asia and Africa. Ana, a powerful, ambitious leader who completed her education in International Relations and Affairs, is an experienced workshop and event facilitator, trained in design thinking and organisational development. Before her time at Social Impact Award, she was a Program and Partnerships Manager at Razlivalište in Serbia where she coordinated Social Impact Award Serbia along with other youth programs, with a strong focus on fundraising.

Ana shared her journey with us, and what it took for her to develop her passion and drive her career in the social enterprise sector. With a background in political sciences, Ana recognised that this was not where her interests lay, as she was not keen to work for a big organisation where changes happen slowly. Being a dynamic person, Ana likes to see change taking place quicker and realised that she wanted to work at an intersection between business and impact.

At the age of 16, Ana gained volunteering experience for the first time and learnt about community service which made it clear to her that she wanted to work in an industry that has a positive impact on the society. Following this, she began to learn about social entrepreneurship in 2014 through attending various conferences, and in 2016 applied to become project coordinator in Serbia which, at the time, was a rare opportunity. Being Serbian native, Ana shared her thoughts on Serbia’s current ecosystem which is now growing as governments, companies and philanthropic players are providing more grants and support. However, at the time, due to the still developing ecosystem, this position gave Ana the opportunity to grow the program and contribute to the social entrepreneurship scene in Serbia. She was able to do this through building new partnerships, organising workshops and raising awareness. Strengthening her foothold in her home country, motivated Ana to expand on a more international level which led her to her next opportunity in Vienna.

Making a move to Vienna in 2018, Ana oversaw the Social Impact Award community and later became involved in programme development. She eventually took over the Managing Director role in 2022 and is now leading the team into the new phase. Taking over the leadership role within the organisation showcased trust as Ana was promoted internally, which was a big personal achievement for her. We asked Ana whether being a successful female leader within the sector led to any challenges, to which she responded:

‘There are two sides of the medal, on the one hand we are currently seeing a lot of women within the social entrepreneurship sector, it is becoming well-balanced and now we are seeing more women than men in our programs, it is encouraging to see this. However, being a woman is definitely felt, sometimes I feel like I am judged or not taken seriously, especially in more patriarchal countries where SIA operates.’

Ana touched upon ‘self-censorship’ and how women sometimes feel the need to be ‘emotionless and calculative’ when talking about business or operating in a professional environment, but she believed this should not be so.

‘We as humans are both emotional and rational beings, and we need to bring both of these sides into everything we do. For me, the most important thing as a leader is to try and bring my authentic self into work everyday, and integrate that into the way I work and communicate,’ she says.

Showing emotions is a crucial part of running an organisation, and Ana is a big advocate for this.

Ana feels very passionate towards social impact and aspires to include more marginalised youth into the Social Impact Award, as well as deepening the relationships in current SIA countries and scaling their work to new ones.

‘Our goal is to deepen impact within the country by reaching more young people, and reach more marginalised youth. We want to see how social engagement can help young people in different countries, especially those with less opportunities.’

‘It is going to be exciting and challenging; we are seeing the sector continuously growing.’ 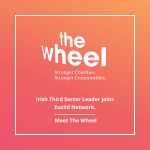 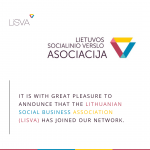