Our network warmly welcomes the Social Economy Action Plan (SEAP) from the European Commission (EC). The initiative will bring improved conditions for 2.8 million enterprises and 13.6 million people working in the Social Economy across Europe. It builds on past successes while also paving the way for improved frameworks and support in various areas, reflecting many of the sector’s needs. We thank the EC for the open cooperation and thorough consultative process which has resulted in a comprehensive action plan.

We warmly welcome the aspects of the SEAP that seek to address wider policy and legal frameworks and appreciate their influence on social economy ecosystems both within the EU and in the wider European neighbourhood. The approach towards the reform and adaptation of State Aid policies is noted as particularly potent in its capacity to open new forms of investment for social enterprises. The explicit references to initiatives such as the Social Taxonomy is also understood to have the potential to lead to broader changes beyond the social economy. However, it is noted that explicit reference to other European initiatives – such as the Corporate Social Responsibility Directive and the Corporate Governance Directive – could be supportive in highlighting the interrelation between policies for the social economy and the traditional economy broadly. Such explicit connection between policies and policy areas is also believed to be supportive of efforts to mainstream the social economy.

EN members stress that effective implementation of the actions is crucial. New projects should be devised in a complementary fashion to those activities that are already being undertaken in the sector. EN members are eager to see the next steps that the EC will take in this endeavour with the apt reminder that ‘the proof of the pudding is in the eating’. Our network will continue to inform the EC’s work with insights about the needs of the sector, based on our annual European Social Enterprise Monitor, annual State of the Industry report and ad-hoc member consultations. Above all, we are excited to have reached this milestone accomplishment. As a network, we stand ready to support the EC in the implementation and communication of the SEAP. We are ready to build a better future together.

If you would like to learn more, do not hesitate to reach out. 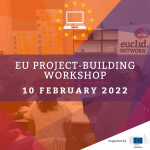 Save the date: EU Project-Building Workshop on the 10th of February 2022!NEWS