By Cornelius
Posted January 28, 2021
In Advocacy, Influencing, NEWS, Opinion
Social enterprises are the future: why we cannot afford to waste this crisis2021-01-282021-03-23http://euclidnetwork.eu/wp-content/uploads/2016/11/logo-euclid-web.jpgEuclid Networkhttps://euclidnetwork.eu/wp-content/uploads/2021/01/social-enterprises-are-the-future_-why-we-cannot-afford-to-waste-this-crisis.png200px200px

Our current economic model has reached its expiration date, or in fact, it had been already reached some time ago. The global pandemic has made this statement painfully clear, as pre-existing inequalities have surfaced due to COVID-19.

Capitalism of shareholder maximization has created a reality where it is beneficial to look for quick wins instead of sustainable success. And to be clear, these are quick wins for the very few, not for most of the people, nor the planet.

I call on you: let’s not waste this global crisis! Let’s redesign our economic system to work for people and the planet.

It seems like economic growth has become equal to welfare and prosperity for all, but this is not the entire truth. Take the Netherlands for instance, a country which has seen its economy boom for the past 40 years, but the average household has barely seen its disposable income grow (Rabobank, 2018). In fact, in his book Capital in the 21st Century, Pikety demonstrated that this is a trend across the entire Western world (Pikety, 2014).  And we see the consequences of this right in front of our eyes, as winners and losers of our economic system live in increasingly separated worlds, leading to growing polarization and the rise of populism all over the world.

And then about that other major crisis: the climate emergency. The faster GDP rises, the better an economy is said to be performing. But something else happens as economic activity expands; the amount of energy and resources we use also increases. This has led us to a situation in which, despite the economic downturn caused by COVID-19, greenhouse gas emissions are at a record high (UN, 2020). And again, we see the consequences of this right in front of our eyes: more severe storms, rising seas, droughts and fires and higher temperatures which has a whole series of effects, not in the least the displacement of millions of people that have lost their livelihoods because of it.

In short, business as usual is failing us.

it doesn’t have to be this way.

There are about 2 million social economy enterprises in Europe alone, representing 10% of all businesses, whose explicit primary objective is to maximize social, societal or environmental impact and not to maximize return on investment (European Commission, 2021).

Where social economy enterprises are true pioneers, entire industries follow. Research of Social Enterprise NL, based on academic literature and case studies from the field, demonstrate that the activities of social enterprises often inspire or even compel widespread change. Take Tony’s Chocolonely, which started as a small social enterprise that sources cacao to ensure farmers a ‘living wage’ and has now expanded to a fast-growing international company, whose sourcing principles have been followed by the largest Dutch supermarket chain (WEF, 2021).

Now is the time to act.

As first responders to the crisis and pioneers of a green and inclusive society, social entrepreneurs have a key role to play in shaping a new tomorrow. But to play their part fully, support from all sectors is needed.

I call on you to:

I envision a world in which social enterprise is the standard, rather than the exception. The policy decisions you make now, will determine what our post COVID-19 economy looks like.

I call on you to take this opportunity and support business which look beyond short-term financial return.

Only such an approach delivers win-win-win for people, planet and prosperity,

We are all in unchartered waters, but if we work side by side, we can truly Build Back Better. We stand ready to work alongside you to further advance these priorities.

Veerle started her career as a social entrepreneur herself, supporting the homeless in her hometown Utrecht, the Netherlands. While completing her Master Thesis on boosting social enterprise through government intervention she was a trainee at the European Commission’s DG GROW, in the unit working on Social Economy. Currently at EN, Veerle works with leading social enterprise support organizations, governments and various international institutions on a daily basis to advance the social enterprise sector across Europe, and globally.

For further clarification and other questions, please get in touch with Veerle Klijn (veerle.klijn@euclidnetwork.eu). 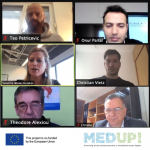 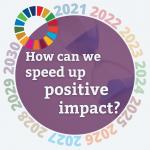 9 years left to achieve the SDGs – How can we speed up positive impact?Influencing, Members, NEWS, Opinion